Visyond Help Home
How to do Scenario Analysis in Visyond

In this article you will find out how to do scenario analysis in Visyond – from creating scenarios by combining individual assumptions to comparing and analyzing different scenarios.

Scenario analysis shows how an output varies when input cells are driven by certain scenarios.

Default State of the Spreadsheet 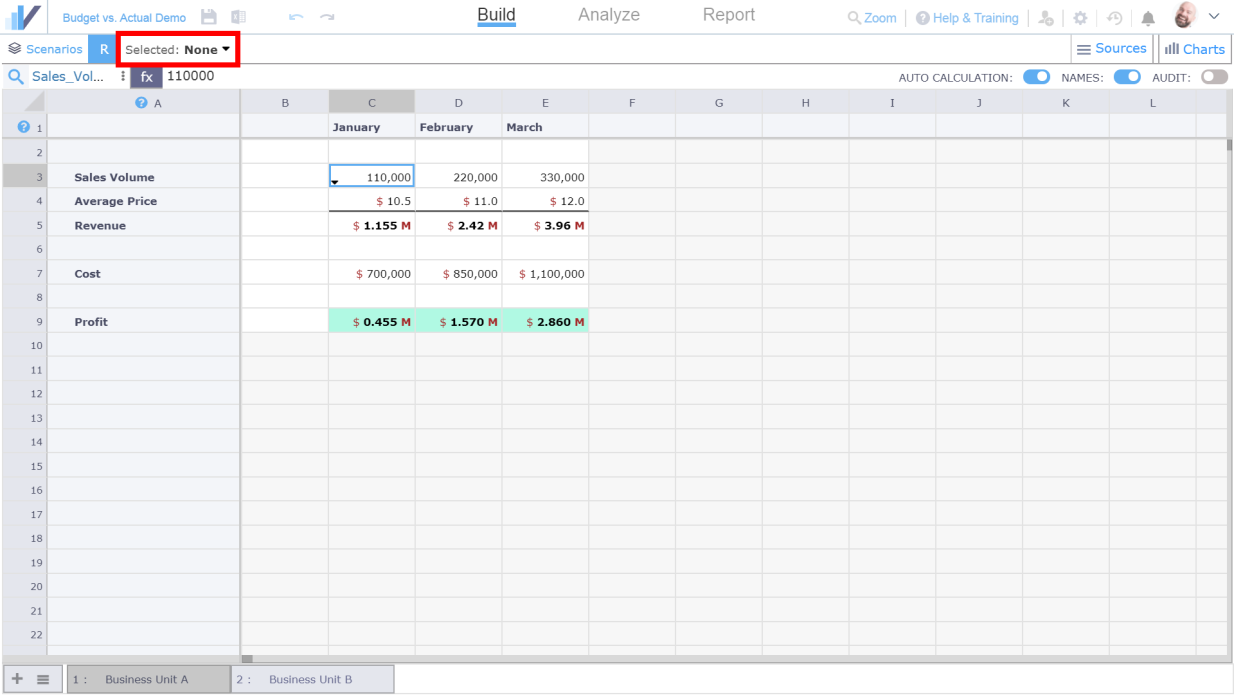 If you need to change multiple cells and group them automatically into a scenario, activate a recording session and edit cells. Click on the Record Scenario button (R) next to the Scenarios button:

This will open the scenario recording panel. Visyond will offer you several options for recording a new scenario: 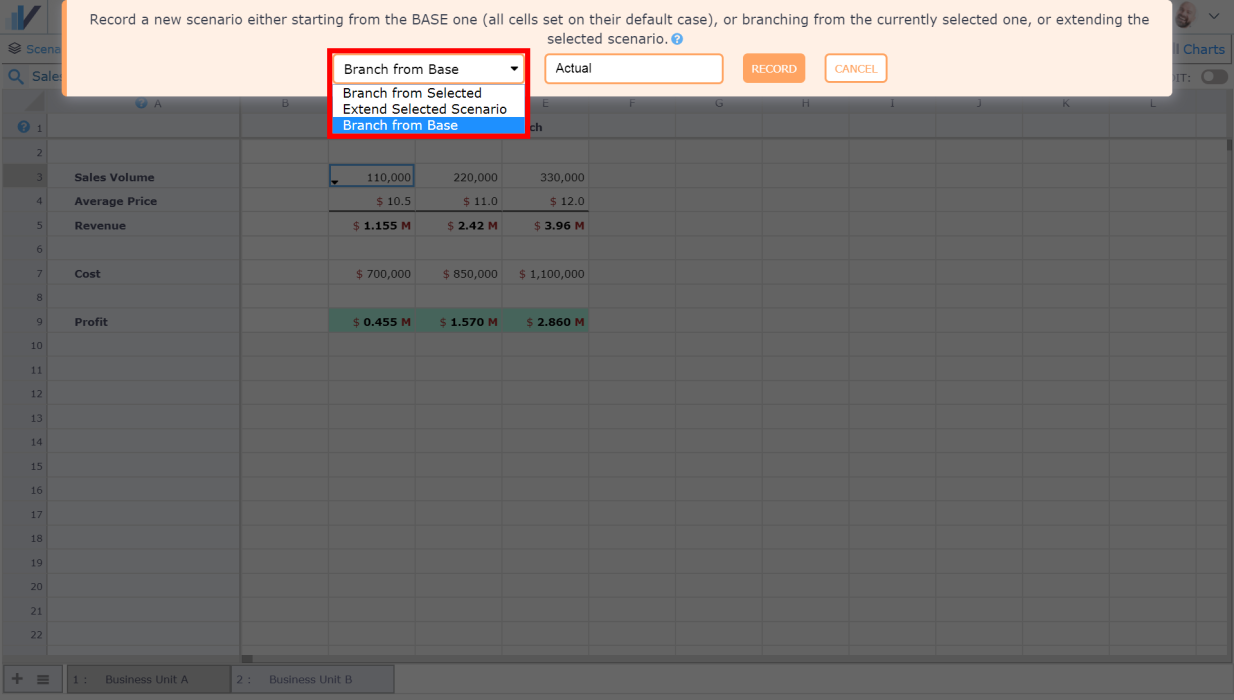 In this mode, you can modify the cells, and the new values will be automatically added to your scenario (do not worry, you will not overwrite or delete any of the existing cell values). Press Save when you have finished editing. 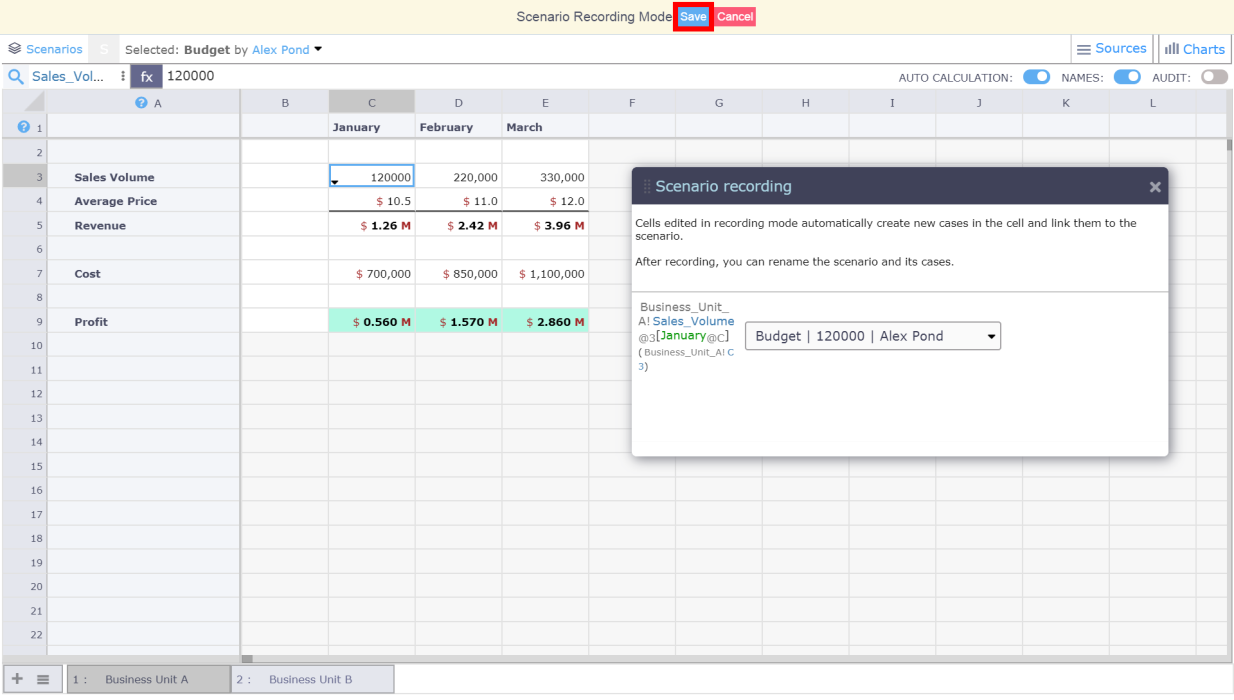 You will be able to rename cases (cell values) and scenarios you have finished recording the scenario. To rename and adjust scenarios, open the Scenario Management panel: 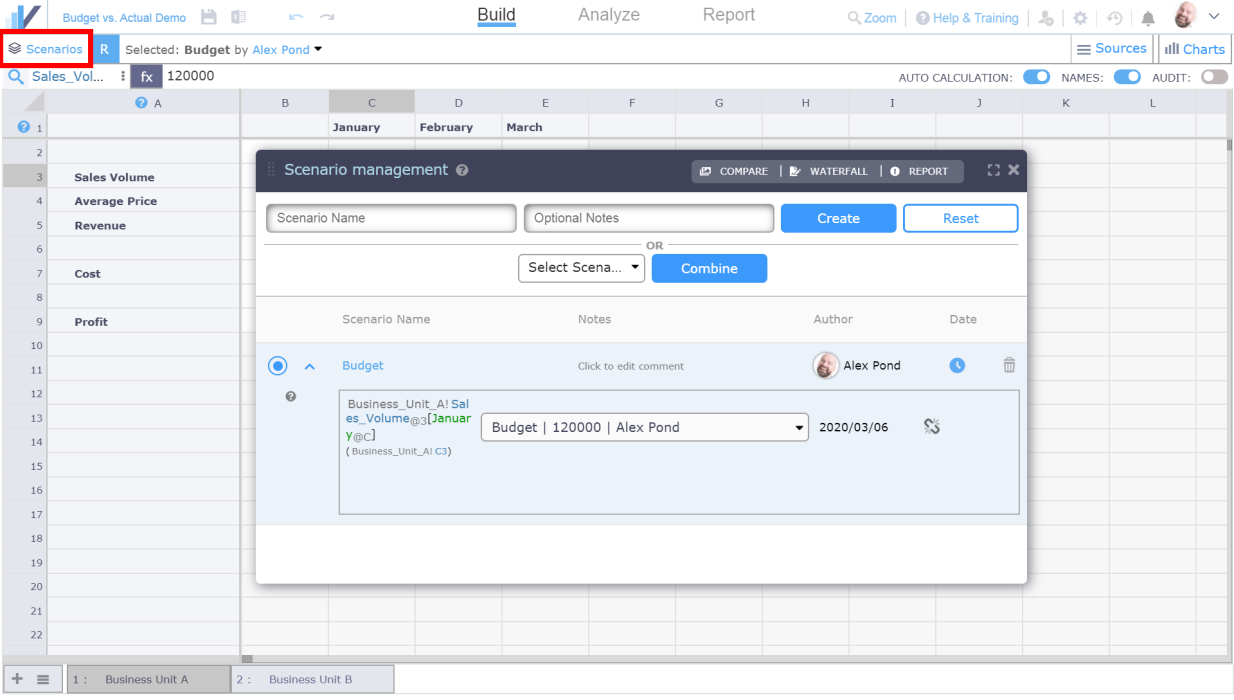 Note the drop-down icons appearing for cells that have multiple values. You can click on it to see and switch between the cell values: 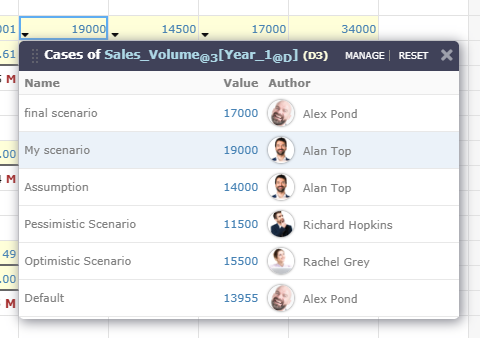 You don’t have to worry about collaborators overwriting/deleting the values or scenarios created by other people or breaking formulas. One of the core Visyond’s principles is that nobody can’t accidentally or on purpose change other people’s work. See this article to lean more about how Visyond stores multiple assumptions in the same cell without overwriting.

Creating a Scenario by Capturing the Spreadsheet State

After you and your collaborators have added multiple cases (assumptions) in cells, you can assign them to a scenario.

To do this, click on the Scenarios button, add a name for your scenario and click the Create button: 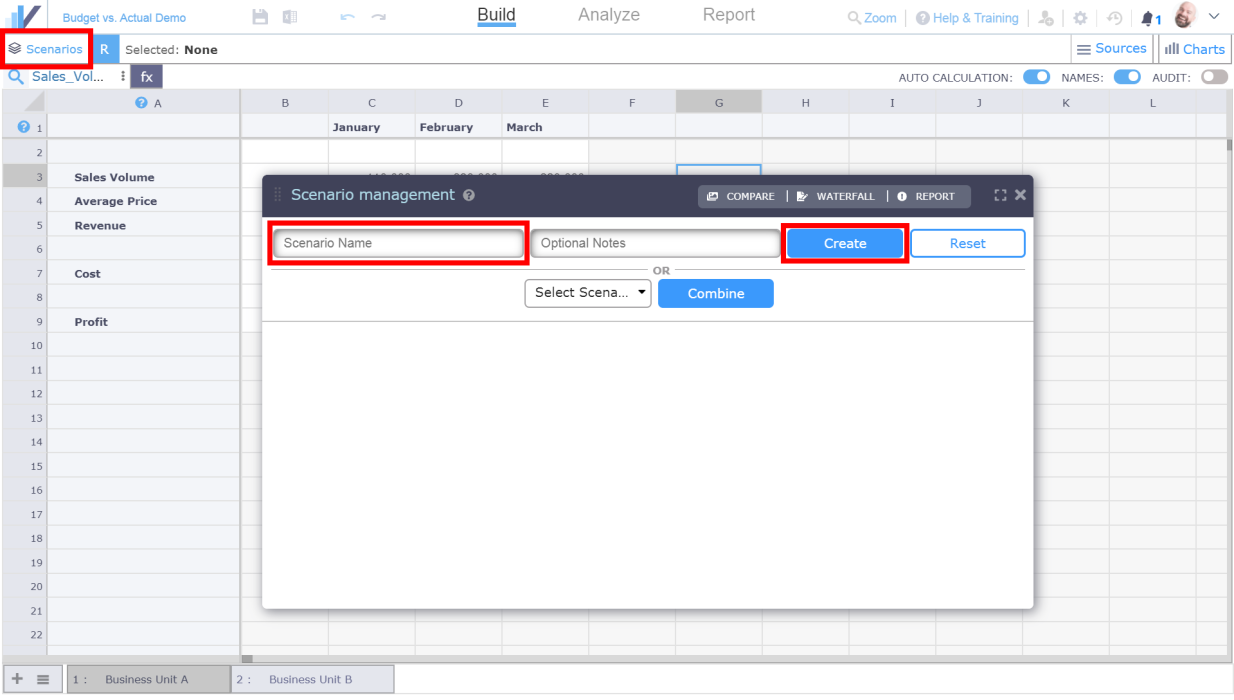 Visyond will create the scenario that will use the currently selected spreadsheet values (a snapshot). The name of the current active scenario will be displayed on top of the grid. There you can also switch between different scenarios: 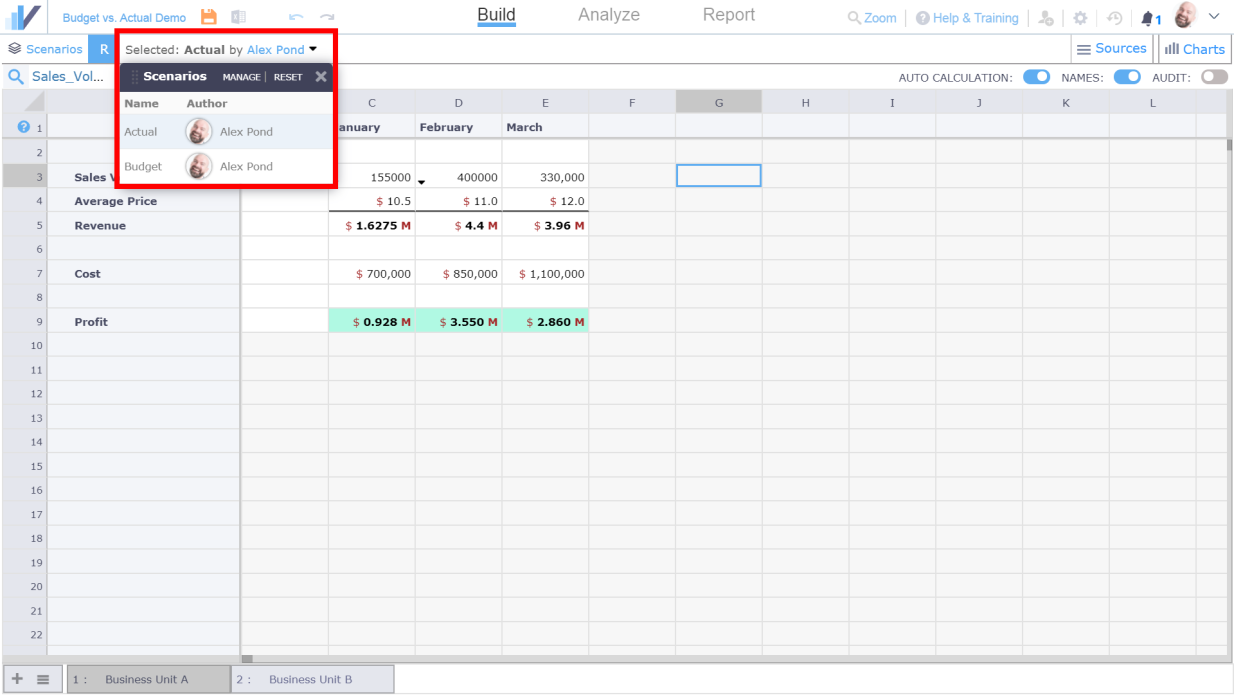 Also the charts will display the scenario name under the title so that you will not be wondering under which assumptions you took that printout: 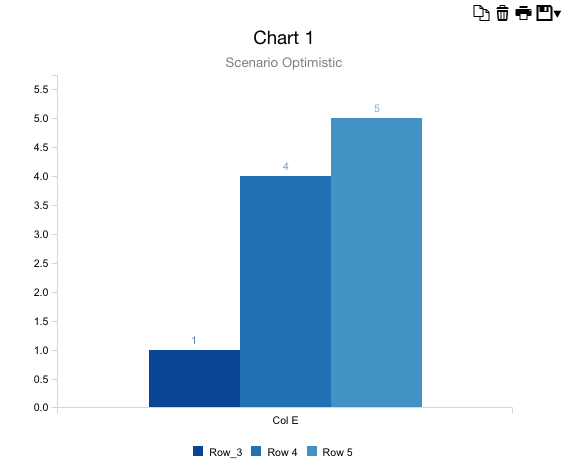 You can switch cases one at a time for each cell from the cases panel, or you can switch scenarios and observe how all the cases that are part of that scenario are set to the right value, making it a breeze to watch charts changing as scenarios are changed.

You can also create new scenarios by combining two or more of existing scenarios.

For example, let’s assume that:

In the Scenario panel: 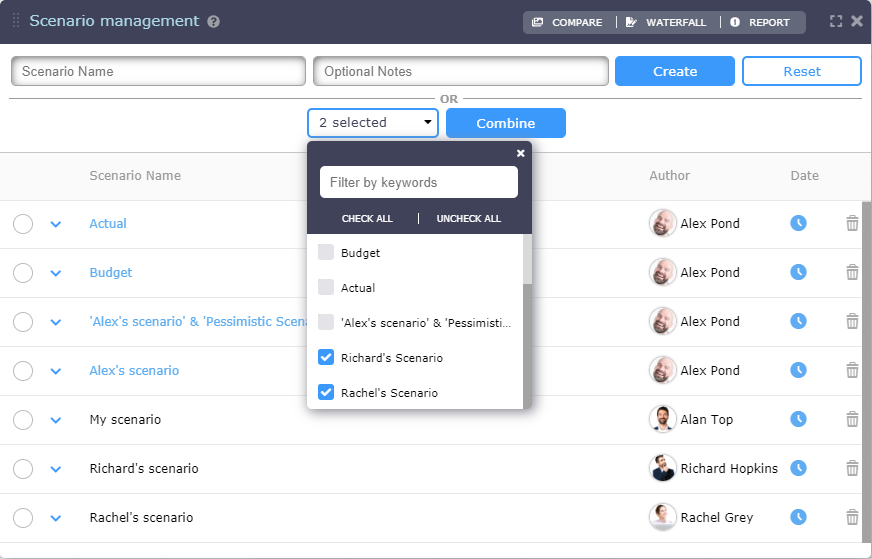 The new scenario name will be an automatic concatenation (you can edit it) of the ones combined (e.g., “Richard’s Scenario & Rachel’s Scenario“).

Comparing Scenarios from the Scenario Drop-down and Panel

Click on the scenario drop-down to select scenarios and see changes in spreadsheets and charts or use Scenario Management panel:

Switch Assumptions (cases) in the Cells Driven by a Scenario

In the Scenario Management panel, click on the “arrow” icon next to a scenario’s name to expand the list of cells that are driven by the scenario.

You can change the case via the drop-down or unlink the cell so that switching back to that scenario would have no effect on the cell. 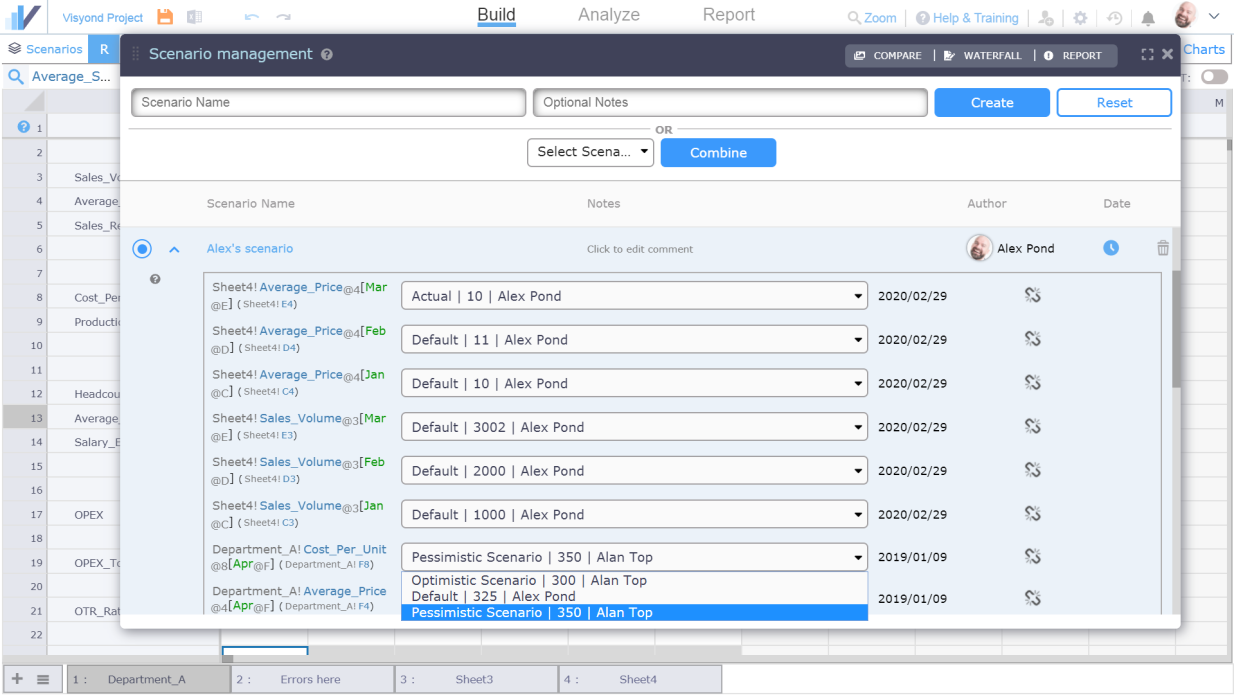 If you want to reset all the cells in the spreadsheet to their Default case, click on the button Reset Scenario inside the Scenario Management panel or in the Scenario drop-down: 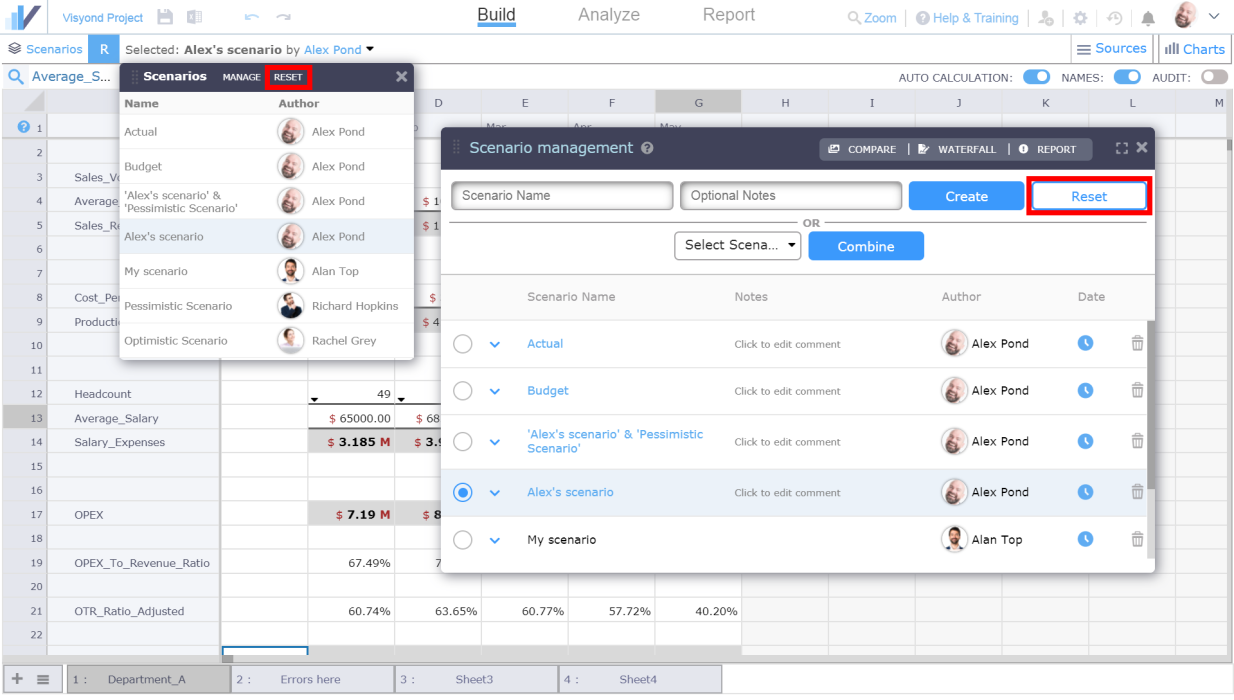 Going to the Analyze tab, and then to Scenarios tab, you can compare scenarios side by side, automatically generating a chart and a variance table ready to be printed, exported or placed on the presentation slide.

Setting up Scenario Analysis requires only the selection of the scenarios to compare, the output cells to analyse, and clicking the Compare Scenarios button. 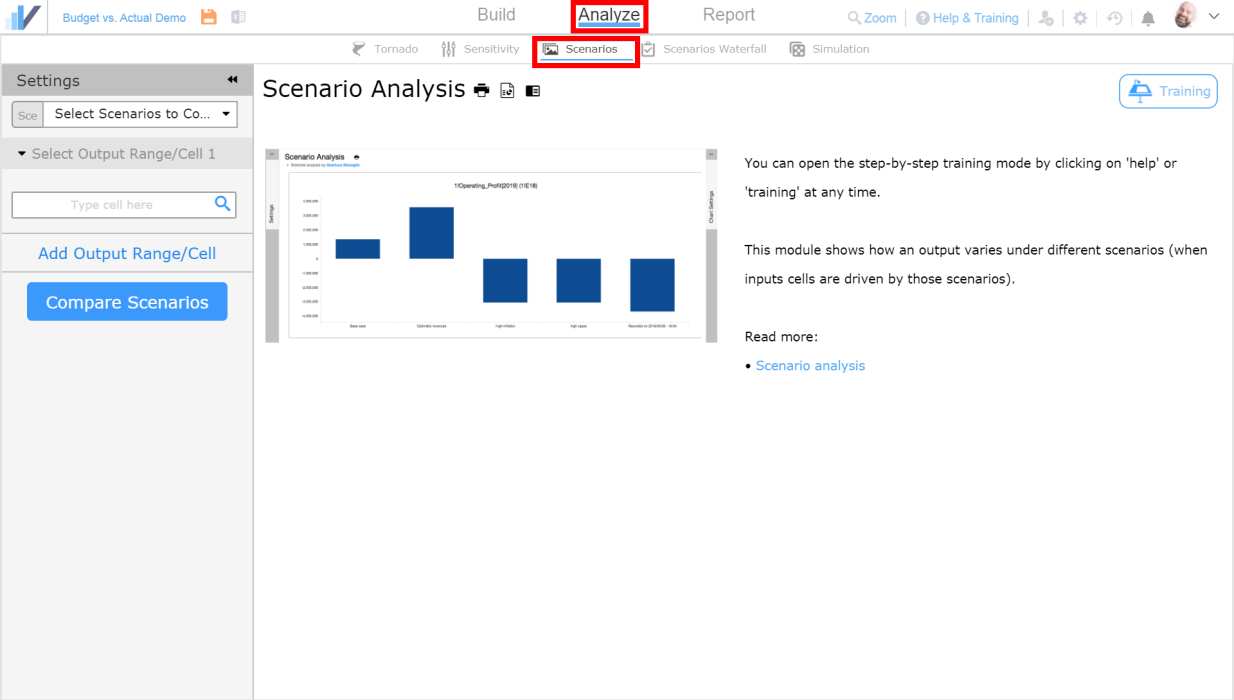 You can select cell ranges and see a time-based comparison (for each period on the x-axis, you will see the value of the cash flow when the selected scenarios are active): 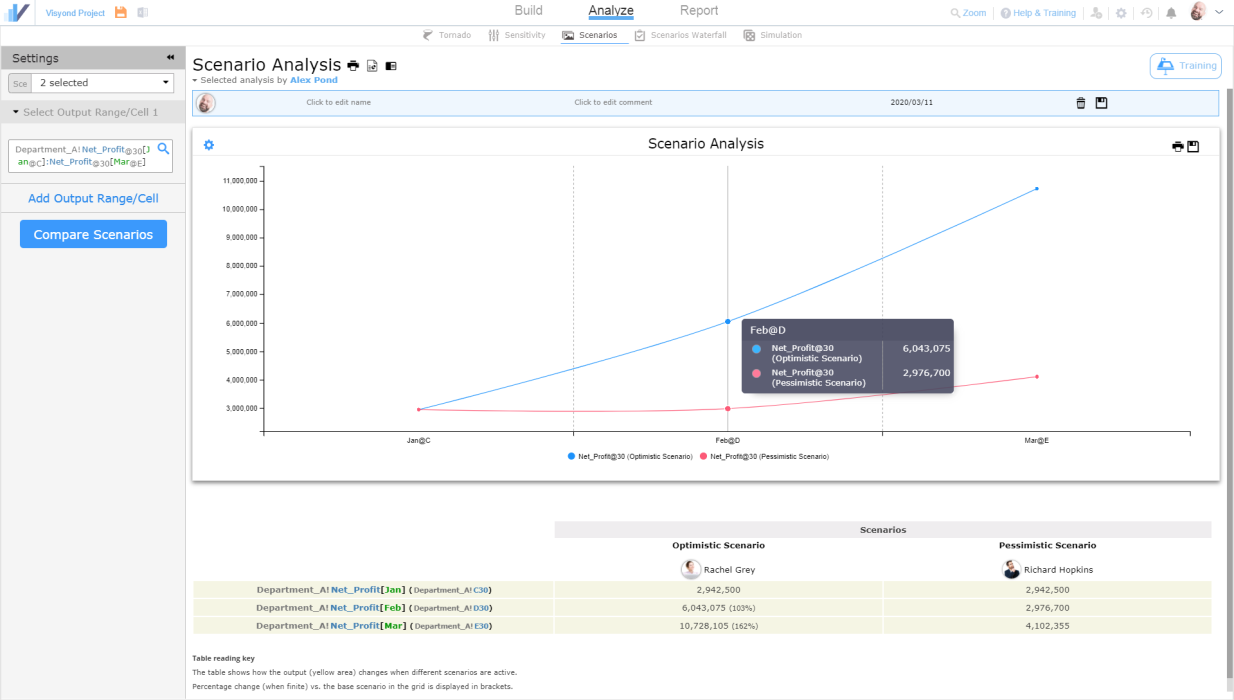 You can also select sparse cells individually and, for each scenario (on the x-axis), see the values of those cells when that scenario is active: 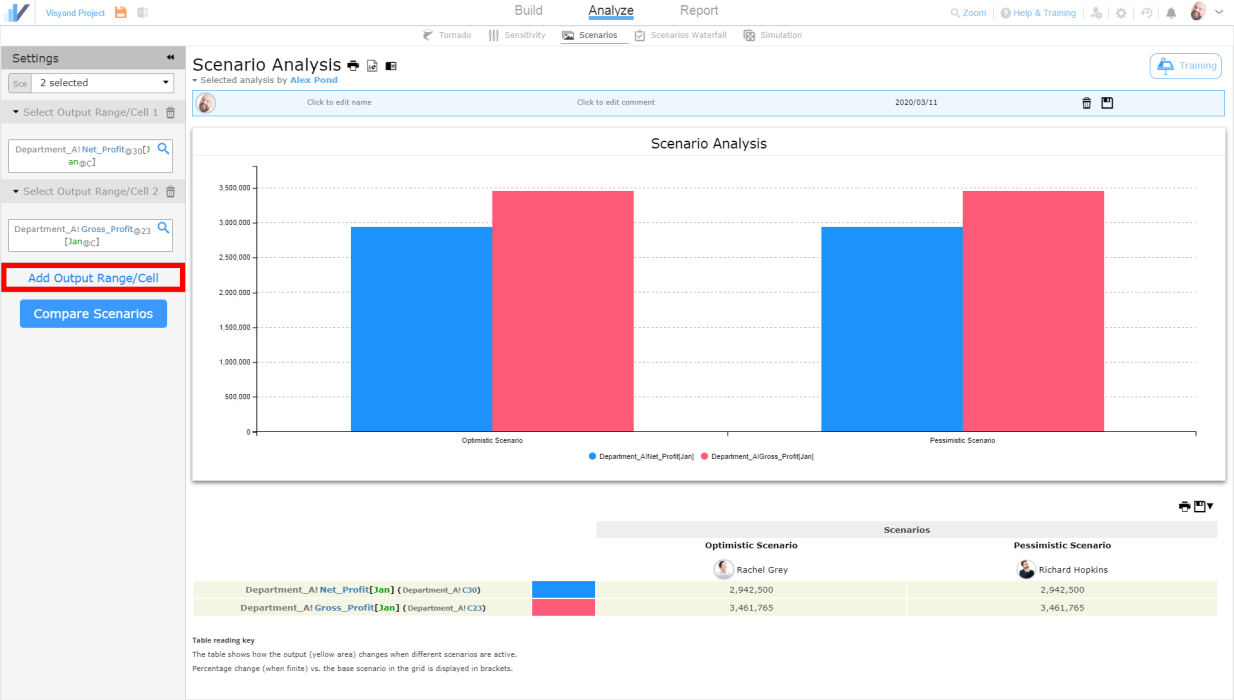 Below the scenario comparison chart you will find a table displaying the values you see in the chart and their percentage change compared to the scenario that is currently selected in the grid. 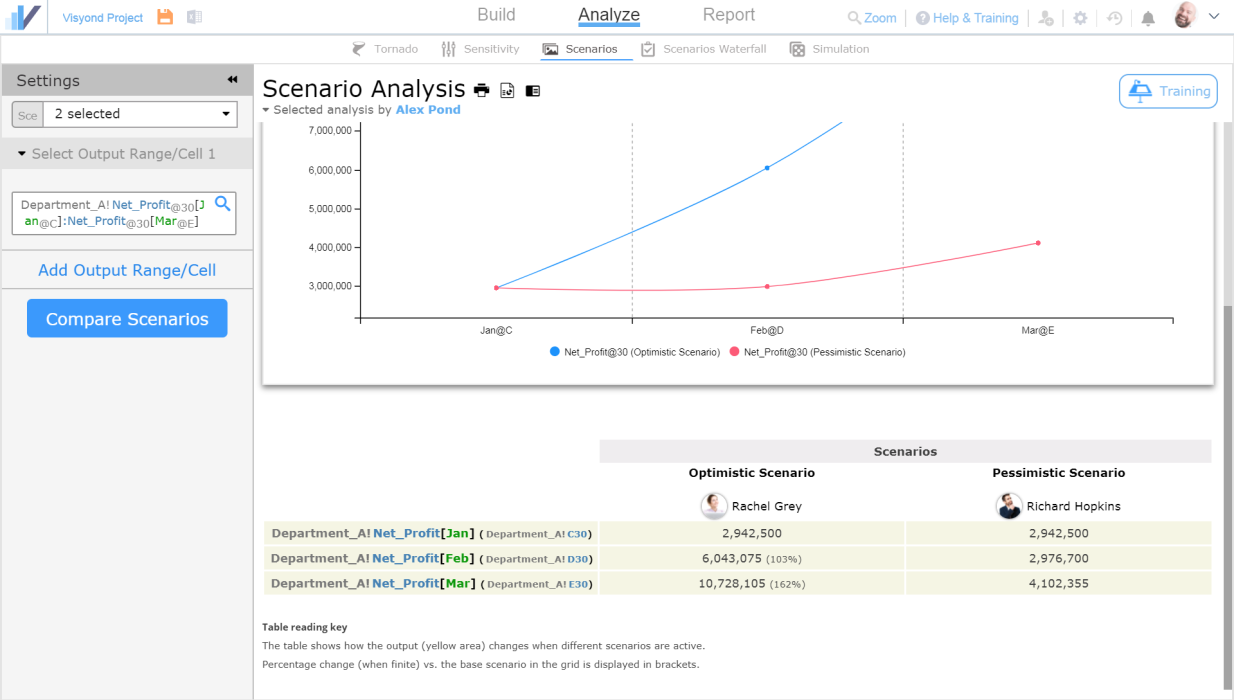 If you’ve updated the scenarios or made other changes to the spreadsheet, when you go back to your scenario comparison charts, you will see that a warning icon appeared next to the analysis that you’ve previously made – this means that there were changes in the spreadsheet since the last time you’ve ran the analysis: 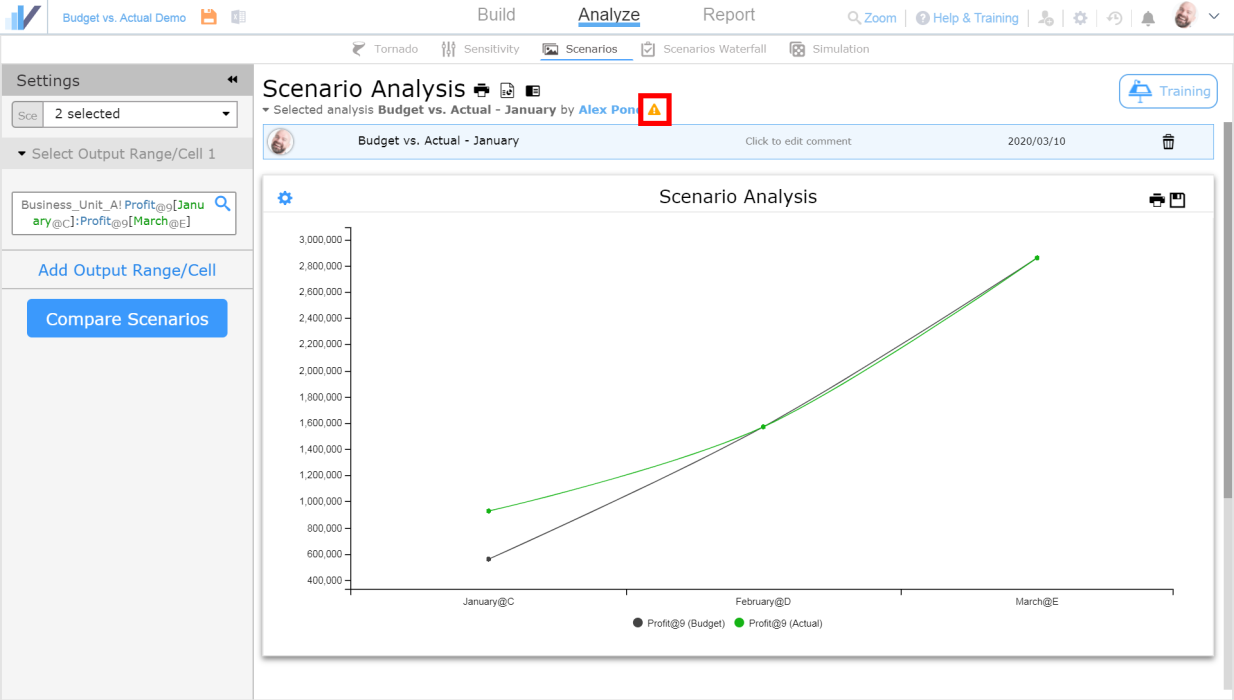 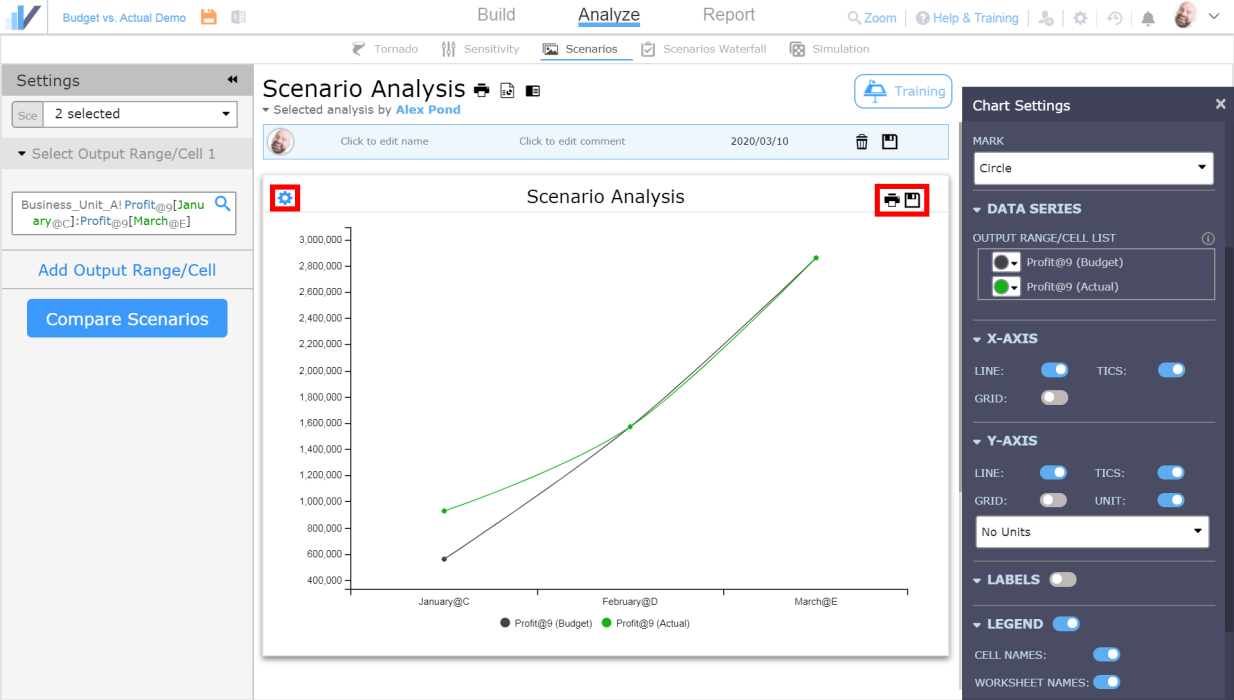 Here you want to see the cells that cause differences among scenarios you want to compare, and hide those that are on the same assumptions. 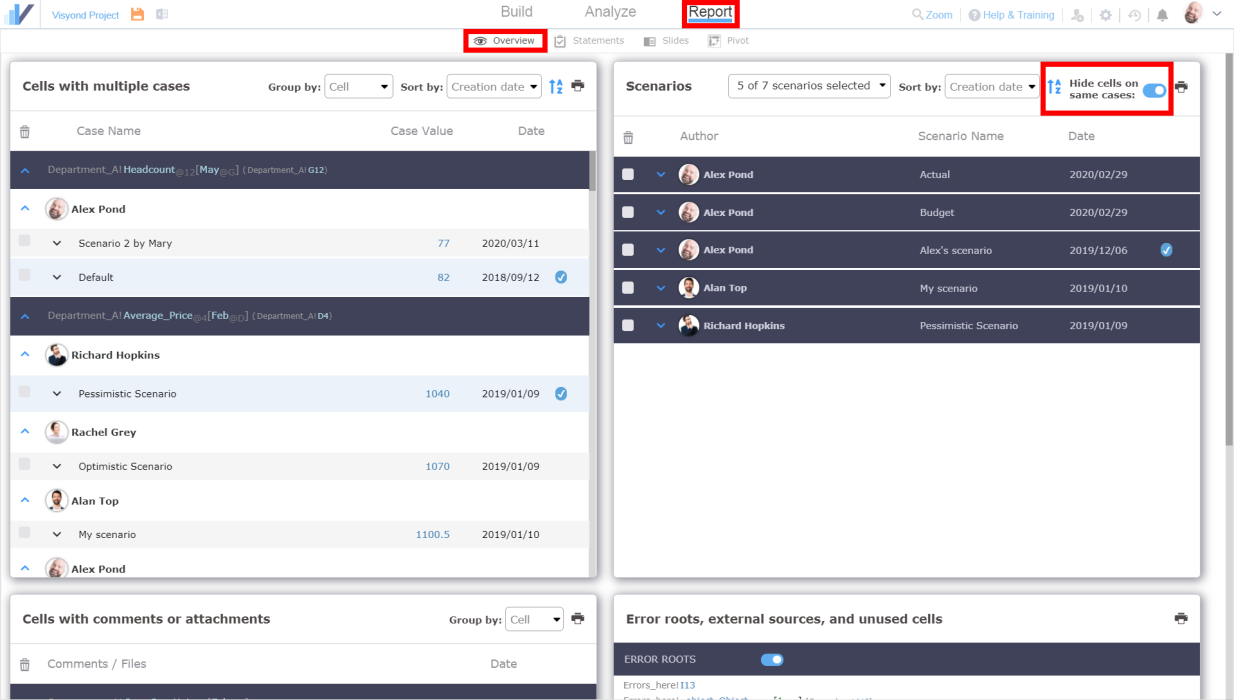 Visyond offers an intuitive visual breakdown (in a waterfall chart) of what cells have changed between two scenarios and the contribution of each change to a selected output cell. In the example below, you can see what cells changed (and by how much) to take the Net Profit from its greater value in the Optimistic scenario to the lesser value in the Pessimistic scenario. 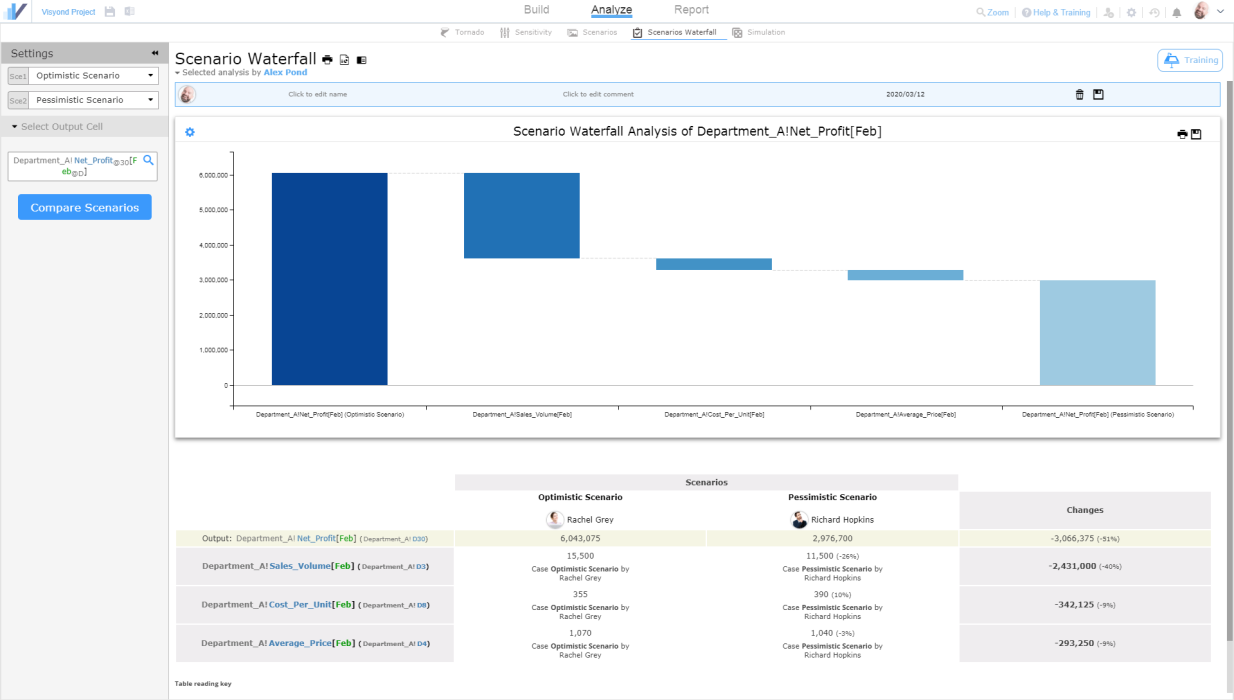 Scenarios can be used to compare and analyze Budget vs. Actual figures. See this article to learn more.